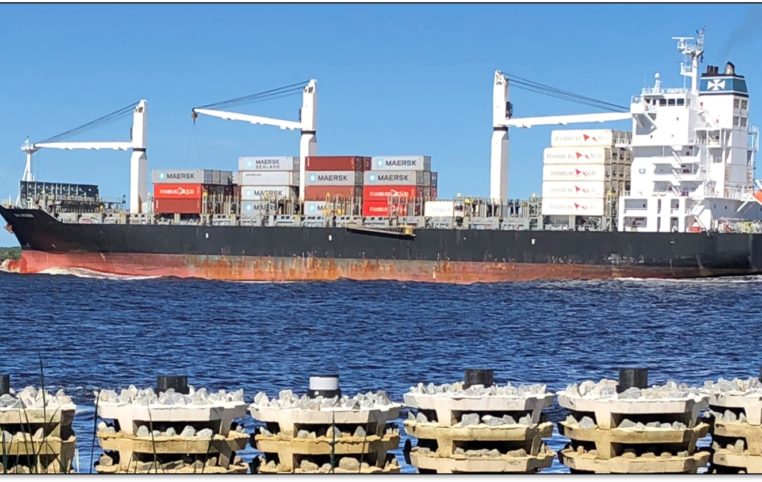 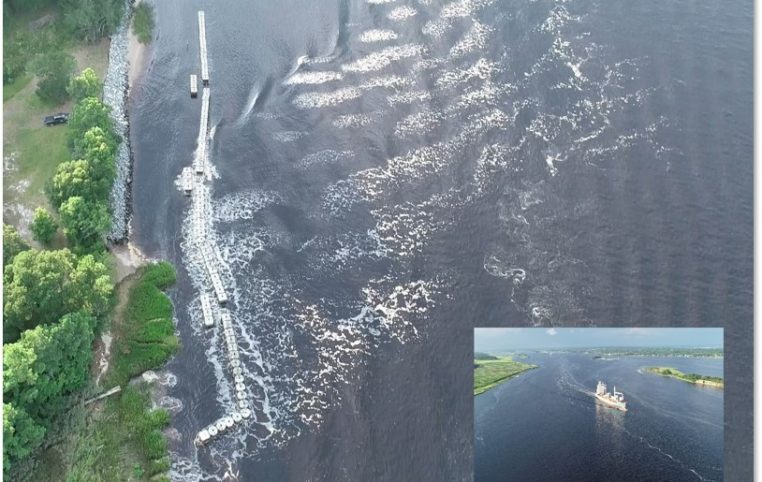 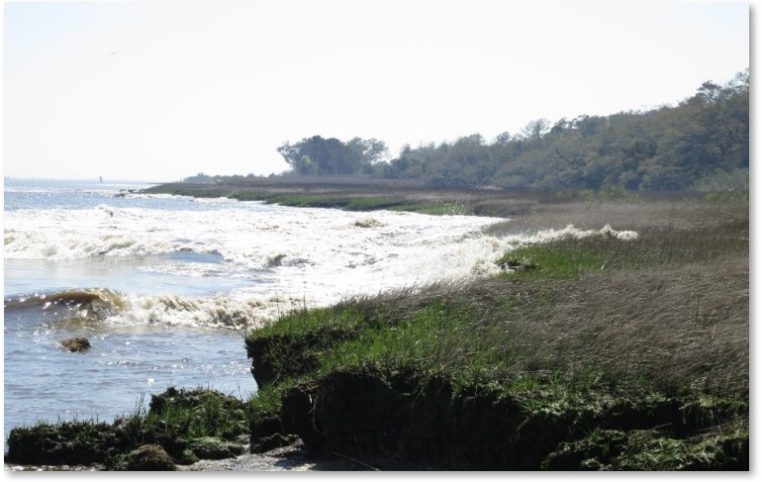 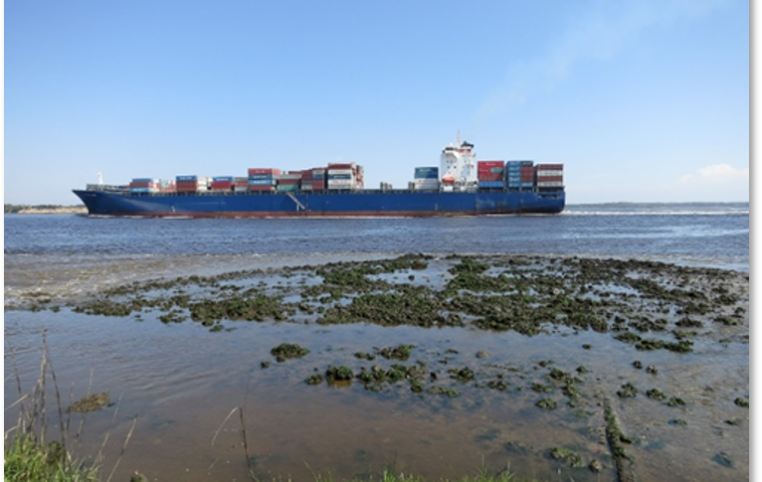 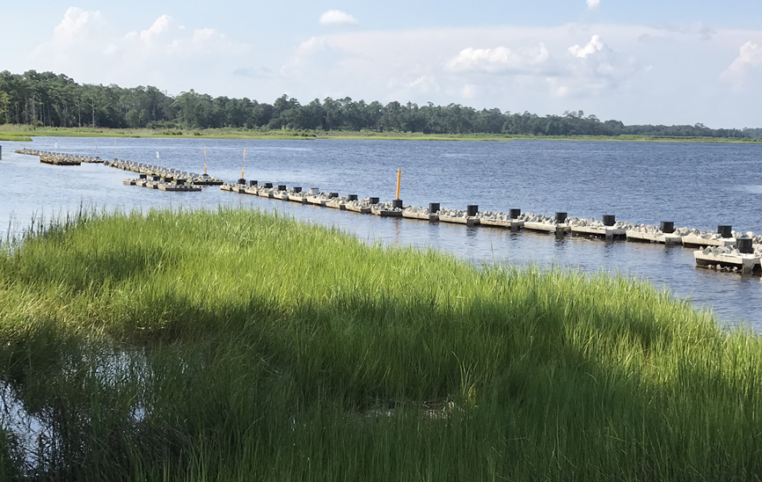 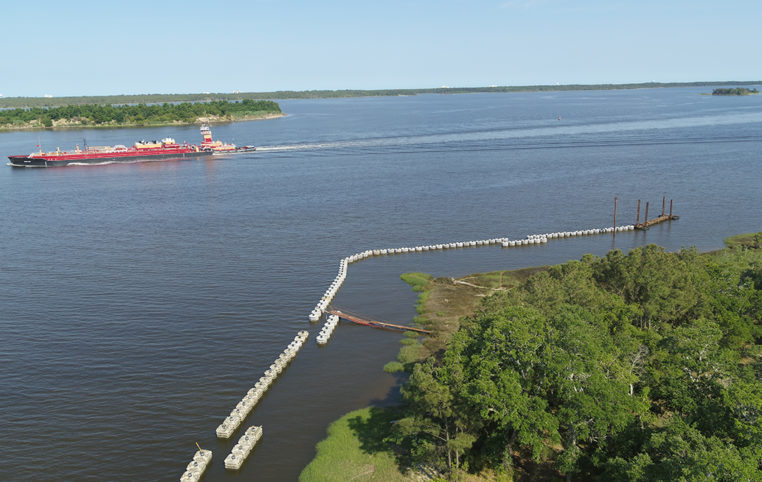 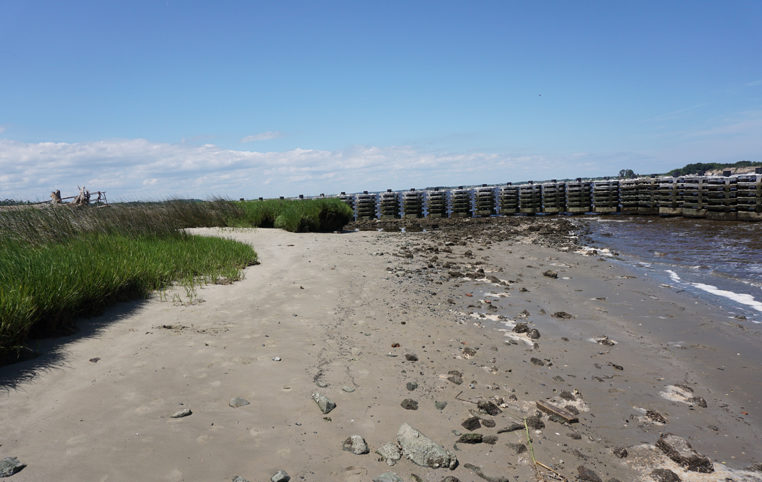 The shoreline at the State of North Carolina’s historic site, Brunswick Town/ Fort Anderson (BTFA), was in need of protection from constant tide forces and dynamic wave action. Colonial-era wharves were being destroyed, and precious artifacts from these buried colonial-era wharves were being washed into the Cape Fear River. Civil War-era batteries were threatened with erosion. Additionally, valuable Spartina alterniflora marsh platforms were being eroded. The North Carolina Department of Natural and Cultural Resources (NCDNCR) was seeking to halt the shoreline erosion in order to prevent the destruction of, and additional wash of these buried colonial-era wharves, the Civil War-era batteries, and the destruction of three other colonial-era wharf sites. Erosion on the banks of BTFA was first noted in 2008, and, from 2008 to 2013, the site lost 75-120’of shoreline.

The wave attenuator technology was identified as a potential solution for shoreline erosion in high-energy wave environments. In the summer of 2017, Phase 1 involved implementing 220’ of the wave attenuator along the highest eroded area of BTFA. Construction for Phase 2 (240’) was completed in early August 2018, prior to Hurricane Florence battering the project area. The structure was not damaged after several storm-related high tide storm surges. The shoreline in these areas has stabilized, and a new shoreline is being formed as the wave attenuator disrupts wave energy and allows for flushing which enables accretion.

In November 2019, the state advertised Phase 3 at BTFA. In the advertisement, they noted “(t)he wave attenuation devices have had a remarkable impact on stabilizing the shoreline and protecting the site.”

Phase 3 includes adding 50’ of structure to the upriver side of the existing structure, and 950’ to the down-river side of the existing structure. The down-river structure will protect two historic wharves in addition to the coastal marsh. University of North Carolina Wilmington will conduct monitoring on Phase 3 and tie these results in with its previous monitoring on Phase 1.

While wave attenuation is the primary function of the system, there are many ecosystem service benefits. The discs have been embedded with natural oyster shells and also soaked in oyster spat before installation to promote oyster settlement.

The wave attenuator concept and structure redefine “living shorelines.” The system stabilizes the shoreline and marsh while enhancing the fish and shellfish habitat on and around the structure.

The concept was selected over a rock sill at the BTFA site because the structure:

Phase 3 of the BTFA project was divided into two phases, A&B. The construction of Phase 3A was completed in May 2021, involving 143 meters (468 feet) of wave attenuators.

Construction of Phase 3B began in September 2021. This shoreline protection project will total 226 meters (742 feet) in length and include the wave attenuator structure.

A secondary objective of the project was to eliminate the maintenance costs of the structure. Construction for Phases 1, 2, and 3A was finalized in July 2017, August 2018, and May 2021, respectively. In the interim following these installations, the project was challenged by consistent Vessel Generated Waves (VGW) from port and sea-bound vessels, high tide storm surge, pounding waves from Hurricane Florence, persistent flooding for weeks after the storm, and other storm events, including Hurricane Isaias in August 2020 and numerous nor’easters. There has been no damage to the structure.

The overall shoreline protection project has exceeded expectations with respect to marsh restoration and marine life utilization of the area. Marsh is being restored behind the Phase 1 structure as sediment material continues to accrete on the shoreline and improve water quality in the river as sediment is removed from the water column. The remanent Spartina alterniflora populations are expanding behind the Phase 1 structure. The structure provides a habitat for sessile life, including oysters, to attach to the structure and grow. There has also been a notable increase in the blue crab population at the BTFA site and the use of the site for recreational fishing.