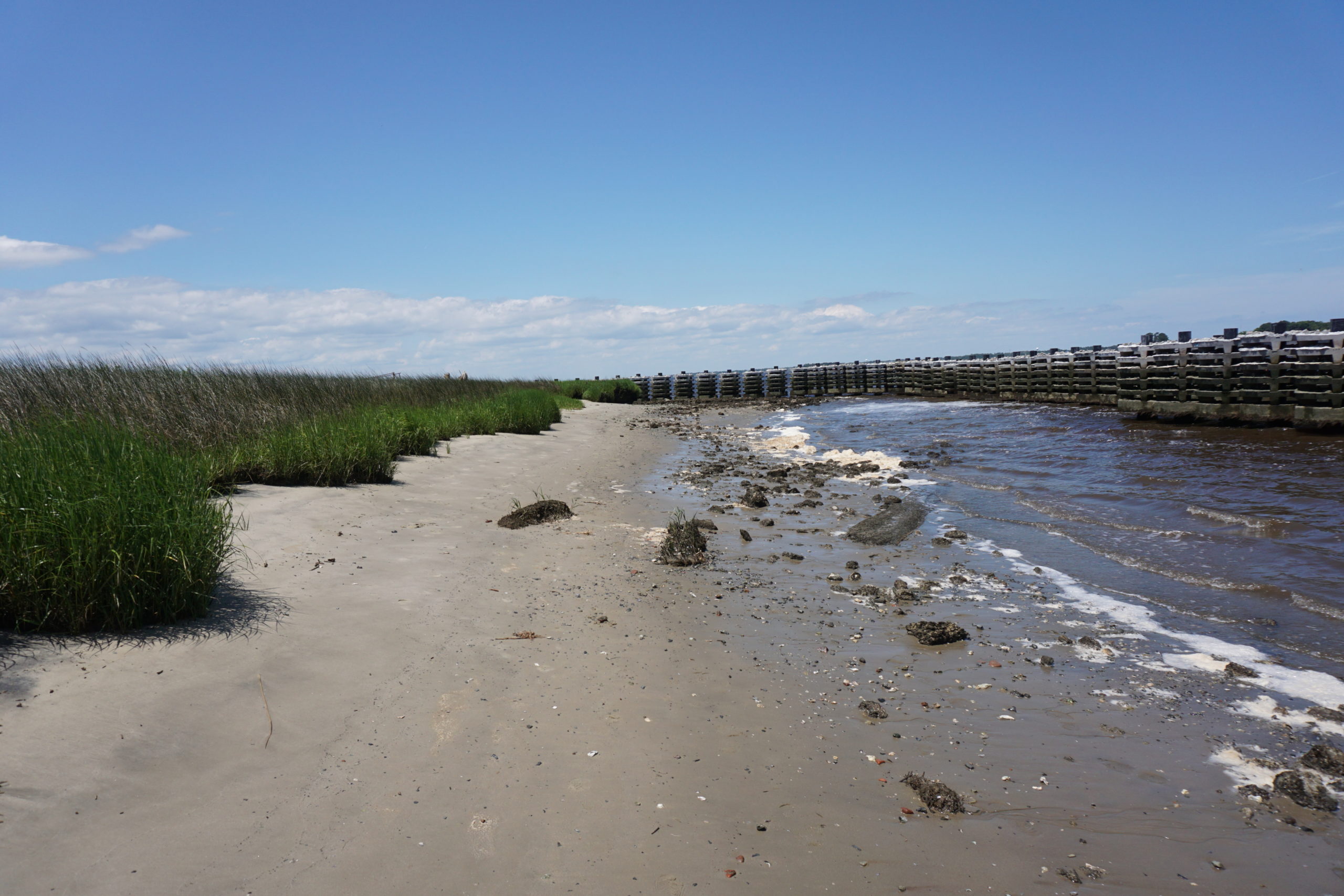 WILMINGTON, NC – September 29, 2021 – W3 Engineering, a coastal and environmental engineering firm with expertise in environmental planning and coastal management, has completed Phase 3A of a shoreline stabilization and restoration project, to arrest the rapid erosion of the shoreline at the Brunswick Town/Fort Anderson (BTFA) historical site, with funding from the State of North Carolina Department of Natural and Cultural Resources (DNCR), and grants from NC Department of Environmental Quality, NC Clean Water Management Trust Fund.

In spring 2008, BTFA staff noticed an increase in erosion along the site’s river shoreline and coastal resources due to the widening and deepening of the Cape Fear River from Port Wilmington to the Atlantic Ocean to accommodate large vessels to the port, creating a ship passing lane in front of the BTFA historical site. Constant tide forces and dynamic wave action were bombarding the colonial-era wharves and washing important historical artifacts into the Cape Fear River and eroding valuable natural coastal resources. As coastal erosion accelerated it quickly uncovered and destroyed three colonial-era wharves and damaged the Civil War era earthwork batteries. Many other historical archaeological artifacts, like colonial shoe buckles and Spanish clothing, for example, were being washed away.

The initial plan to protect BTFA involved a traditional rock breakwater structure (TRBS) living shoreline. A TRBS would have worked along the Battery A shoreline; however, there was not sufficient horizontal area to accommodate such a large TRBS at the historic wharfs where the original, natural river channel occurred. This area has a natural drop-off, and a TRBS would have covered the historic wharfs and the coastal resources which DNCR was also planning to save.

Atlantic Reefmaker, an innovative water flow-through wave attenuation technology that dissipates wave energy, was installed in the first phase of the project involving 67 meters (220 feet) of structure along the area with the highest erosion. The second phase included an installation of an additional 73 meters (240 feet)—just before Hurricane Florence hit the North Carolina coast in September 2018.

A secondary objective of the project was to eliminate maintenance costs of the structure. Construction for Phases 1, 2 and 3A were finalized in July 2017, August 2018 and May 2021, respectively. In the interim following these installations, the project was challenged by consistent vessel-generated waves from port and sea-bound vessels, high tide storm surge, pounding waves from Hurricane Florence, persistent flooding for weeks after the storm, and other storm events, including Hurricane Isaias in August 2020 and numerous nor’easters. There has been no damage to the structure.

The overall shoreline protection project has exceeded expectations with respect to marsh restoration and marine life utilization of the area. Marsh is being restored behind the Phase 1 structure as sediment material continues to accrete on the shoreline and improve water quality in the river as sediment is removed from the water column. The remanent Spartina alterniflora populations are expanding behind the Phase 1 structure. The structure provides habitat for sessile life, including oysters, to attach to the structure and grow. There has also been a notable increase in the blue crab population at the BTFA site and use of the site for recreational fishing.

“We appreciate the continued confidence of the State of North Carolina Department of Natural Resources, and the opportunity provided us, to design and install the innovative wave attenuation structure in Phase 3A to protect and restore the natural and historic site at BTFA. The Atlantic Reefmaker was able to meet the challenges at the historic wharfs with its minimal substrate impact. The State and W3 Engineering are pleased with the resiliency of the structure along with its dissipation abilities for vessel-generated waves. An added bonus is the environmental benefits of shoreline accretion, marsh grass expansion and marine life utilization,” said Randy Boyd, Principal, W3 Engineering.

Brunswick Town/Fort Anderson (BTFA) is a state-owned historic site located on the west bank of the lower Cape Fear River in Brunswick County, North Carolina. The area has a historical interest related to colonial life in North Carolina as well as a Confederate fortification during the Civil Water. This protected historic site is administered by the North Carolina Department of Natural and Cultural Resources (DNCR) Division of State Historic Sites and Properties.

Established in 1726, Brunswick Town was the first successful British settlement in the Cape Fear area of North Carolina. The town thrived as a major British port. Brunswick Town was the place of governance for two provincial governors. In 1776, during the American Revolutionary War, the British raided the town, destroyed it, and it was never re-built.

Construction of Fort Anderson began in March 1862 on top of the old Brunswick Town village. Fort Anderson was the northern most fort of a series of fortifications constructed by the Confederates along the Cape Fear. Their goal was to protect Wilmington, NC, a vital port during the Civil War, and located ten miles upriver from Fort Anderson. The fort fell to the Union soldiers on February 17, 1865.